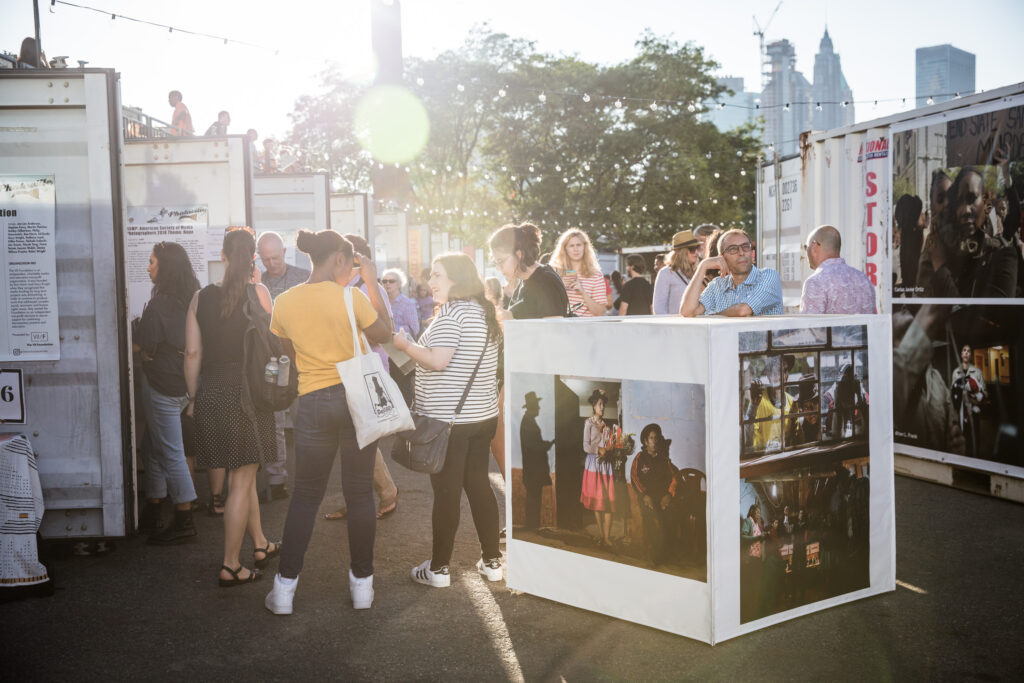 LOS ANGELES – To celebrate its 10th anniversary, the Annenberg Space for Photography – the premier destination for photography in Los Angeles – is hosting Photoville LA, a huge outdoor extravaganza with more than 55 exhibits showcasing world-class photography, plus video projections, workshops, nighttime discussions and family-friendly activities. Photoville is the brainchild of United Photo Industries (UPI), co-founded by Sam Barzilay, Dave Shelley, and Laura Roumanos in Brooklyn, where the Photoville festival has hosted thousands of photographers and photography fans for nine days every fall for the last eight years.

Annenberg Space for Photography Presents Photoville LA will run for two weekends: April 26-28 and May 2-5, 2019. It is open to all ages and is free of charge. Parking rates vary depending on the time and day but will always be under $5.00.

As they’ve done with Photoville’s original location in picturesque Brooklyn Bridge Park, the UPI team will transform Century Park (adjacent to the Photo Space in Century City) into an immersive photography village, including multiple galleries made from repurposed shipping containers, photo cubes, and photographic banner installations.

Photoville LA’s exhibits will focus on the power of visual storytelling, showcasing images from across California, the country, and around the world. The festival gives photographers and photographic organizations the unparalleled opportunity for thousands of people – from the general public to industry professionals – to discover their work. It will also give Southern Californians a spectacular place to see, listen, and learn about photography. The festival also offers plenty of opportunities to eat and drink in the beautiful backyard of the Annenberg Space for Photography – where visitors will find Photoville LA’s famous community beer garden. Smorgasburg LA, known for its craft and unique style, will bring over 20 local food vendors to Century Park for the very first time on Saturday, April 27, and will feature a limited number of vendors on other days.

Working with more than 60 programming partners, Annenberg Space for Photography Presents Photoville LA will feature groundbreaking work by more than 200 visual artists – including a retrospective of the work of internationally-renowned war photojournalist Lynsey Addario, acclaimed Mexican-American photographer Estevan Oriol’s lowriders, and for the first time in Los Angeles, East Side Stories, by photographer/social commentator Joseph Rodriguez.

In addition, the festival will offer exhibits featuring The New York Times, United Nations OCHA, Two Bit Circus, and nighttime programs featuring National Geographic, ESPN, the Los Angeles Times, among others. There will also be demonstrations and workshops by Leica Camera and Adobe Creative, plus aneducation day for hundreds of Los Angeles middle- and high-school students, panel discussions and talks, family-friendly photo activities, and curated tours.

“I’m thrilled to kick off the Annenberg Space for Photography’s 10thanniversary with Photoville LA,” said Annenberg Foundation Chairman, President, and CEO Wallis Annenberg. “When we opened our doors in Century City a decade ago, it was my hope that this would become the premier venue for photography in Los Angeles. And so it has. This is the place where world-class photographers and photography fans alike can gather and share their love for what is my own favorite art form. And now Photoville LA is the perfect expression of our goal: bringing people together to celebrate this art that is for everyone.”

In fact, immersion and interactivity are at the heart of Photoville’s success and popularity, and have made it the largest annual photographic event in New York City and among the most-attended photographic events nationwide. Photoville NY welcomes more than 90,000 visitors over the course of its run each year, providing participating photographers with an unparalleled opportunity to have their work seen. No other museum, gallery, or festival presents work by such a wide range of photographic artists and photojournalists to so many people in so little time – for free.

“United Photo Industries is proud to bring the wondrous photo spirit and the extraordinary partners we have cultivated over the last eight years to the Annenberg Space for Photography in Los Angeles,” said Laura Roumanos, co-founder of UPI. “We are excited to celebrate their 10thanniversary, to celebrate the photo community of Los Angeles, and to be able to introduce talented artists from around the globe. This is a unique opportunity for us to discover a whole new group of local photographers, while also making these powerful visual stories from a diverse group of artists and organizations accessible to all Angelenos.”

UPI and the Annenberg Space for Photography will announce additional programming and partners as Photoville LA approaches. For more information, visit www.photoville.la. The hours of operation are as follows:

The 55 exhibitions presented in shipping containers, outdoor photo cubes, banners, and interactive installations will include:

The Photoville LA evening programming consists of a series of multimedia events in the community beer garden that showcase traditional documentary storytelling, as well as eclectic performances, created in partnership with the Los Angeles Times, ESPN, National Geographic, and CONTACT HIGH: A Visual History of Hip-Hop, currently on view at Annenberg Space for Photography.

Remaining true to the ethos of Photoville, a host of panel discussions and hands-on workshopson a wide variety of topics will be provided free of charge with a refundable deposit for those who attend.Photoville LA’sfree talks will feature some of the most innovative work and pressing issues in photography today from the Committee to Protect Journalists, The New York Times, For Freedoms, MFON: Women Photographers of the African Diaspora, Month of Photography Los Angeles, Adobe, Leica, Joseph Rodriguez, and many more. The full programming and artist lineup will be announced in the coming weeks.

Photoville’s Interactive Workshops and Activitieswill provide practical, skills-based instruction in some of photography’s most sought-after markets, led by some of the most talented working photographers in the industry. Workshop highlights include an exclusive family and youth workshop with Janette Beckman andCey Adamsbased on their celebrated Mash Up Series; a hands-on Dance and Costume Photography workshop with celebrated photographers Mimi Haddonand Aline Smithson; and a self-portrait workshop catered to local youth hosted by L.A.-based organization Las Fotos. All workshops are BYOC (bring-your-own-camera) and will meet for an introduction and presentation in the Photoville Workshop Area before heading out on a live, guided shooting session. A live presentation and demonstration space will also be provided by Adobe Lightroom; and Leica Camerawill conduct conversations, workshops, demonstrations, photo walks, and more.

The full schedule and programming details for talks, workshops, and activities will be announced soon.

Photoville LAwill feature a Student Education Day andProfessional Development Workshop for Teachers, created and produced by United Photo Industriesand with additional support by education partner PhotoWings. On Thursday, May 2, hundreds of public school students from across Los Angeles will converge on the park to experience the power of photography and interact with acclaimed curators and artists for an event dedicated solely to the students. In addition to tours, the students will attend panel discussions featuring youth photographers currently enrolled in photography programs with Las Fotos, Venice Arts,and the Los Angeles Center for Photography. On Saturday, May 4, educators who want to incorporate visual storytelling into their curriculum are invited to participate in a free one-day professional development workshop. UPI’s Teacher Professional Development workshop will blend teaching demonstrations with artist talks, and will culminate in a hands-on lesson planning session in collaboration with five Photoville LAfeatured photographers.

Premiering simultaneously at Annenberg Space for Photography, CONTACT HIGH: A Visual History of Hip-Hopcelebrates the photographers who have played a critical role in bringing hip-hop’s visual culture to the global stage. The exhibition is an inside look at the work of hip-hop photographers, as told through their most intimate diaries: their unedited contact sheets, and is based on the bestselling book of the same title. Before the book’s release, selections from CONTACT HIGH were featured at Photoville NY, which inspired the full debut exhibition at the Photo Space. CONTACT HIGHis curated by Vikki Tobak with Creative Direction from Fab 5 Freddy, and is produced in partnership with United Photo Industries.

About Annenberg Space for Photography

Annenberg Space for Photography is a cultural destination dedicated to exhibiting both digital and print photography in an intimate environment. The space features state-of-the-art, high-definition digital technology as well as traditional prints by some of the world’s most renowned photographers and a selection of emerging photographic talents as well. The venue, an initiative of the Annenberg Foundation and its trustees, is the first solely photographic cultural destination in the Los Angeles area, creating a new paradigm in the world of photography.