The Annenberg Space for Photography has announced the lineup of speakers for their popular IRIS Nights lecture series presented in conjunction with the upcoming WAR/PHOTOGRAPHY: Images of Armed Conflict and Its Aftermathexhibition.

WAR/PHOTOGRAPHY will open free to the public on March 23, 2013, and run through June 2, 2013. This exhibition is organized by the Museum of Fine Arts, Houston, and is made possible with generous support from the Phillip and Edith Leonian Foundation and the Annenberg Foundation. The exhibit encompasses over 150 images going as far back as 1887 through present-day and is arranged by themes presenting both the military and civilian points of view including the advent of war, daily routines, the fight itself, the aftermath, prisoners of war, refugees, remembrance and more.

The Annenberg Space for Photography offers live programming through our IRIS Nights lecture series, a public program offered free of charge, by online reservation on a first-come, first-served basis. The series brings to life the most current exhibit with presentations by featured and guest photographers and notable experts. These programs give attendees unique access to the artists in an intimate setting.

All IRIS Nights lecture series will take place on Thursday evenings from 6:30pm-8pm unless otherwise noted. Schedule and participants are subject to change.

Carolyn Cole is a multiple award-winning photographer and a staff photographer for the Los Angeles Times. She has covered conflicts in Iraq, Kosovo, Afghanistan, Haiti and Liberia, where she earned the Pulitzer Prize for her coverage of the siege of Monrovia.

David Hume Kennerly won a Pulitzer Prize for his coverage of the Vietnam War. He has been shooting on the front lines of history for more than 45 years and has photographed eight wars, as many U.S. presidents, served as chief White House photographer for President Gerald R. Ford and was named “One of the 100 Most Important People in Photography” by American Photo.

March 28 – Sara Terry and Marissa Roth
War: Witnesses to Aftermath
Photographer Marissa Roth has spent 28 years working on a personal, global photo essay that addresses the immediate and lingering effects of war on women in different countries and cultures. Photographer Sara Terry created the Aftermath Project, a nonprofit committed to educating the public in peace building and post-conflict studies. Both photographers will share images from their work and insights into the long-term consequences of conflict and the resilience of the human spirit.

April 4 – Alexandra Avakian
Malibu Teen To Conflict Photographer: Journeys In The Muslim World
Photojournalist Alexandra Avakian has been published in National Geographic, Time, LIFE, The New York Times Magazine and more. Her photographic and written memoir, Windows of the Soul: My Journeys in the Muslim World, was named as one of American Photo’s year-end best.

April 11 – Peter van Agtmael
Disco Night Sept 11
Award-winning photographer Peter van Agtmael has documented the consequences of America’s wars in Iraq, Afghanistan and at home. His journey and experiences of life during conflict will be discussed. A monograph of his work,2nd Tour Hope I Don’t Die, was published in 2009.

April 18 – Benjamin Lowy
Innovation in Documentary Storytelling
An award-winning photojournalist, Benjamin Lowy has embraced new technology and mediums to promote stories. Lowy will discuss his work in conflict zones and the U.S. His image of Hurricane Sandy graced the cover of Timemagazine, the first camera-phone image to ever be so featured.

April 25 – Stephen Mayes and Michael Kamber
Tim Hetherington: A Very Personal War
Two years after Tim Hetherington’s death while documenting the Libyan war, this lecture will explore alternative representations of conflict. Hetherington sought to shift the emphasis from the military hardware to the “software” of conflict, making war a personal matter. The discussion will explore the legacy of Hetherington’s work with contributions from colleagues Stephen Mayes, Director of VII Photo in New York, and Michael Kamber, conflict photographer, author and co-founder of the Bronx Documentary Center.

May 2 – Ed Ou
Personal Stories in the Context of Breaking News
Ed Ou is a Canadian photojournalist who has been bouncing around the Middle East, former Soviet Union, Africa and the Americas since 2006. With work recognized by POYi and World Press Photo among others, Ou will discuss personal stories of how people in the news are shaped and affected by the world changing around them.

May 9 – Donna De Cesare
Children of War
Photographer/educator Donna De Cesare has spent two decades focusing on the lives of Central American children exposed first to war and later to gangs. Her newly published book Unsettled / Desasociego: Children in a World of Gangs is both a memoir and a visual history of her experiences. De Cesare teaches documentary photography at the School of Journalism at the University of Texas at Austin.

May 16 – Lynsey Addario
The Saturation of War
An American photojournalist based in London, Lynsey Addario photographs for The New York Times, National Geographic and Time. She will discuss her work documenting conflict over the past decade, and the challenges photographers face making compelling images from ongoing wars, when our society is saturated by these images.

Friday, May 17 – Slideshow Night is a special presentation that showcases hundreds of additional images related to the exhibit themes in WAR/PHOTOGRAPHY.

May 23 – Jeff & Andrew Topham
LIBERIA ’77 – Photo is Life
In 2010, Canadian brothers Jeff and Andrew Topham returned to the war-torn West African country of their childhood, Liberia. Discovering that much of Liberia’s photographic record of its peaceful past had been destroyed by war, they created a documentary and online photo project culminating in an exhibition currently housed at the National Museum in Monrovia. They will discuss the importance of photography in the rebuilding of a society devastated by war.

May 30 – Nina Berman
Evidence and Fantasy: The War at Home
Photographer, author and educator Nina Berman is known for her work photographing wounded American veterans including her 2006 “Marine Wedding” image. Presenting selections from work made since 9/11, she will explain her motivations and approaches to photographing war on the domestic front.

The photographs in WAR/PHOTOGRAPHY and content in IRIS Nights lectures may not be suitable for all visitors. 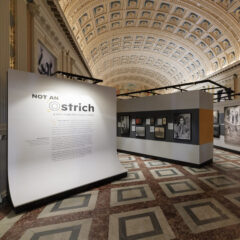