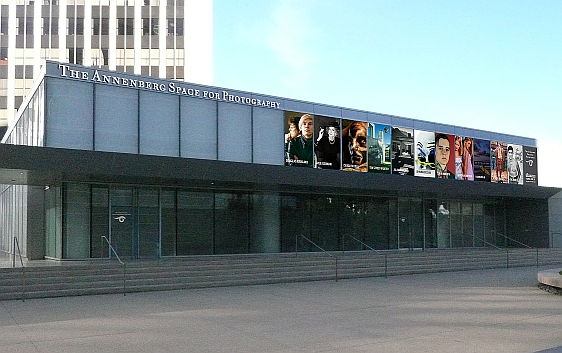 The Annenberg Foundation announced today the opening exhibit for the Annenberg Space for Photography, a community space dedicated to both digital images and print photography in Los Angeles, California to open Friday, March 27, 2009.

The premiere show, entitled “L8S ANG3LES,” will be comprised of images from eight Los Angeles-based photographers in the genres of fine art, architecture, documentary, fashion, photojournalism and celebrity portraits.  The artists contributing to the group show are among the most respected in their fields– John Baldessari, Catherine Opie, Greg Gorman, Douglas Kirkland, Tim Street-Porter, Julius Shulman, Lauren Greenfield, and Carolyn Cole.  The exhibit will also include work from three Los Angeles Times staff photographers depicting life in this city; Lawrence Ho, Genaro Molina, and Kirk McKoy.  Following a gala premiere on March 25, the exhibit will open to the public on Friday, March 27 and close on June 20, 2009.

Located on the former site of the Shubert Theatre, the Photography Space is a 10,000 square-foot facility.  The dynamic exhibition space will feature, along with a traditional print gallery, a state-of-the-art digital presentation system capable of sharing an unprecedented number of photographs with the public in large and high-resolution format.  This system can also simultaneously show adjacent video of the photographers discussing their work.

The selected work of the artists, though greatly contrasting in style and tone, all speak to the mission of the Photography Space, which is to celebrate photography as an art form and present images focused on the human condition. Anne Wilkes Tucker, Gus and Lyndall Wortham Curator of Photography from the Museum of Fine Arts in Houston, served as Special Advisor for the opening installation.  Of the artists featured in “L8S ANG3LES” Ms. Tucker comments, “The vision of these photographers reflects the vast talent and energy that have made Los Angeles into a world class city in less than a century.”

Annenberg Foundation Vice President, Wallis Annenberg, commented, “I have a passion for photography and a great pride in the fine city of Los Angeles.  I am thrilled that artists of this magnitude are taking part in our inaugural show and know that through their brilliance they will bring great inspiration to the visitors of this new space which we are creating and operating as a gift to the community.”

The exhibit will include work from:

• John Baldessari: John Baldessari is one of the most sought after artists of our time.  He is a recipient of the Americans for the Arts lifetime achievement award and the Governor’s Award for Lifetime Achievement in Visual Arts in California.  He has shown his work in over 200 solo exhibitions, and taken part in more than 750 group shows.  Employing humor and irony to convey his thoughts, he takes his own photographs or appropriates images from popular culture to make large scale artworks.

• Carolyn Cole: is a staff photographer for the Los Angeles Times.  She won the Pulitzer Prize for Feature Photography in 2004, for her coverage of the siege of Monrovia, the capital of Liberia.  Ms. Cole has specialized in photographs of children living in war torn areas such as Israel, Liberia and Iraq, but her newest coverage has ranged from the Israeli war with Gaza to the recent inauguration of Barack Obama.  She has repeatedly placed herself in situations of danger around the world in order to report on issues that she believes should be covered.

• Greg Gorman: Greg Gorman began his career in 1968 when he photographed a Jimi Hendrix concert, which led to coverage of the sixties rock movement.  Over the decades, he has captured famous people in film, music, sports and the art world, ranging from Bette Davis and Leonardo DiCaprio to David Hockney and Philip Johnson.  Working in a high key, black and white style, he developed a distinctive look for his images, which he later brought to his photographs of nudes.  He has also produced music videos.

• Lauren Greenfield:  Lauren Greenfield’s work features the dark side of the idealized world of stardom and celebrity.  Her work focuses on issues relating to youth culture, gender identity, body image, eating disorders, money and the influence of popular culture on how we live.  Ms. Greenfield has published several books and has directed a feature-length documentary entitled Thin, as well as the follow-up short film kids + money for HBO.

• Douglas Kirkland: Douglas Kirkland became famous for his photographs of Marilyn Monroe in 1961 and has since photographed generations of actors, ranging from those of the Golden Age to today.  He is also known for his work as a set photographer, having worked on more than 100 films, including 2001: A Space Odyssey, The Sound of Music, Out of Africa, Butch Cassidy and the Sundance Kid, Titanic and most recently Australia.  He began his career as a staff photographer for Look and Life magazines and has continued to freelance for major publications.

• Catherine Opie: Catherine Opie came to art-world prominence in the mid-1990s as an artist specializing in issues within portraiture and documentary photography.  Throughout her work she has investigated aspects of social culture, taking portraits of many groups including the gay and lesbian community, surfers, and most recently high school football players.  Ms. Opie has also focused on the cultural and literal landscapes in and around various cities in the United States, including Los Angeles, Minneapolis, and Pittsburgh where she’s explored how identities are projected by our architecture.

• Julius Shulman: For over 72 years Julius Shulman has played a major role in crafting the images of the Los Angeles and Southern California lifestyle as they came to be perceived by the world.  He is best known for his iconic photographs of landmark buildings such as the Kaufman House in Palm Springs, “Case Study House #22” and the Stahl House designed by Pierre Koenig, where he used people to humanize the cool international style.  He continues to photograph today.

• Tim Street-Porter:  Tim Street-Porter has documented architecture for nearly 30 years.  Through his lens visitors can see a Los Angeles that no longer exists, as well as new buildings such as the Disney Center and the restorations of historical modern and vernacular architectural treasures.  He was inspired by the city’s unique quality of light, which he has used to great effect over the years with his eloquent photographs.

The Photography Space will also offer the public programs, which will include lectures and workshops related to “L8S ANG3LES.”  Additional dates will be announced as available.  Online registration for all events, unless otherwise noted, will begin March 27, 2009 at www.annenbergspaceforphotography.org.

“Iris Nights” Lecture Series
Conducted on Thursday evenings from 6:30 to 8pm, these sessions will be free but will require advance reservations.  Confirmed thus far are:

Julius Shulman and Wim de Wit (Head of the Department of Architecture and Design, The Getty Research Institute) on May 14, 2009

This session includes a fee.  More information and registration is at www.gormanphotography.com and www.gormanworkshops.com.

Operating hours Wednesday through Sundays are 11am to 6pm.  The Photography Space is closed Monday and Tuesday.  Underground self-parking is available and can be accessed via Constellation Boulevard.  Validation for reduced parking fees will be provided.

About the Annenberg Foundation
Established in 1989 by Walter H. Annenberg, the Annenberg Foundation provides funding and support to nonprofit organizations in the United States and globally through its headquarters in Radnor, Pennsylvania, and offices in Los Angeles, California and Washington, D.C. Its major program areas are education and youth development; arts, culture and humanities; civic and community life; health and human services; and animal services and the environment. In addition, the Foundation operates a number of initiatives which expand and complement these program areas. The Annenberg Foundation exists to advance the public well-being through improved communication. As the principal means of achieving this goal, the Foundation encourages the development of more effective ways to share ideas and knowledge.