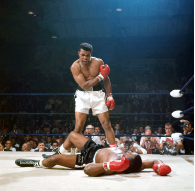 The Annenberg Foundation is pleased to announce the third exhibit in the Annenberg Space for Photography, an innovative cultural destination dedicated to presenting print photography and digital images. Entitled “SPORT: IOOSS & LEIFER,” the exhibit will feature the work of Walter Iooss and Neil Leifer, two of the world’s most preeminent sports photographers. This is the first time both photographers will be featured together in a two-person show. This exhibit is also a rare peek at the artistry of Sports Photography, as it is not usually shown in an exhibition space. “SPORT: IOOSS & LEIFER” will open to the public on November 12, 2009 and run through March 7, 2010.

Spanning the careers of both men, over 80 photographic prints will be seen in the exhibit which includes iconic images such as Muhammed Ali’s victory over Sonny Liston and Michael Jordan in full glory. “SPORT: IOOSS & LEIFER” will take visitors on a journey through some of the most memorable and inspiring moments in sports history. These images will shine a light on the tremendous power, grace and strength it takes to be a top athlete, as well as present the biggest personalities from the field. A digital feature presentation will expand the visitor experience by presenting several hundred more of their photographs, and will include interviews and commentary from athletes and artists. Among the concepts explored in the exhibit will be the athlete as a hero and role model in our society, as well as how sports are used to improve the public well-being.

During the four-month exhibit, the free IRIS Nights lecture series will continue to be held inside the space on Thursday evenings. Expected speakers include Iooss, Leifer, notable athletes, sports commentators and others. Additional programs related to the exhibit will include a children’s photography contest, a themed group slideshow evening, photography workshops and a family event to be held the Saturday prior to Super Bowl Sunday, 2010. Details and final schedules will be announced later this Fall.

Walter Iooss began his career in East Orange, NJ, in the early 1960s. By the age of 20, Iooss’ photo of Philadelphia Phillies pitcher Art Mahaffey landed him his first Sports Illustrated cover and since then Iooss has shot over 300 covers for the magazine. Iooss is an award-winning legend in sports photography, best known for his portraits of famous athletes like Michael Jordan, Muhammad Ali, Brett Favre, Joe Montana and Wayne Gretzky. In his career, he has covered virtually every major sports event, including all 43 Super Bowls. Iooss has also photographed performers like the Rolling Stones, James Brown, Jimi Hendrix and Janis Joplin. In 1982, his project on athletes who were working their way to the 1984 Summer Olympics in Los Angeles resulted in publication of the book, Shooting for the Gold. He has published a variety of other books, including Baseball, Football and Sports People, and created a masterful photo essay with Michael Jordan, Rare Air, which went on to become No. 1 on The New York Times best-seller list. His latest work Athlete, which was released in May 2008, marks his 14th book.

Neil Leifer’s photography career has spanned almost 50 years. Specializing in sports photography, Leifer’s photos have regularly appeared in every major national magazine, including the Saturday Evening Post, Look, LIFE, Newsweek, People and, most often, Sports Illustrated. Leifer’s pictures have graced over 200 covers of Time Inc. publications — 170 at Sports Illustrated, and 40 at TIME Magazine. Out of his 15 published books, his 1978 Abrams book, Sports, has been hailed by many as the best of its kind. His newest book Guts and Glory: The Golden Age of American Football 1958-1978 was published by Taschen in November 2008. Leifer admits his favorite subject to shoot was Muhammad Ali, whom he has photographed on more than 80 separate occasions. Leifer now devotes 100% of his time to producing and directing films.